Report on IMDR Convocation 2022 Back to All News 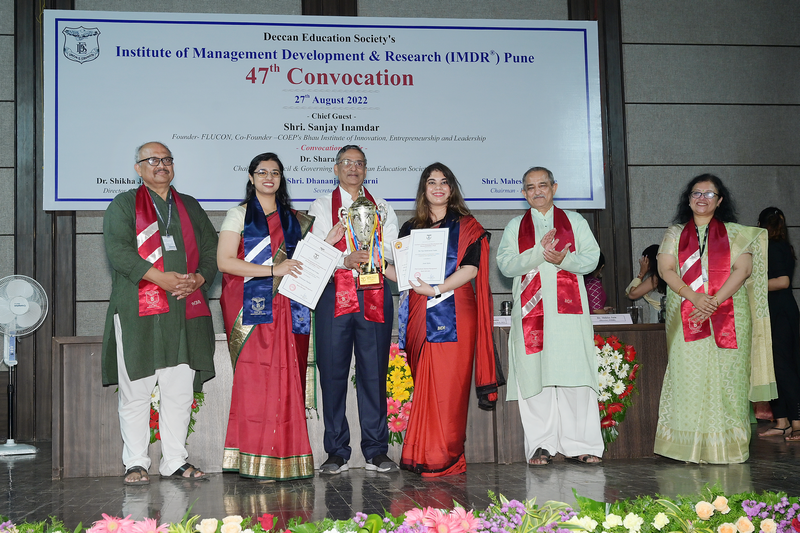 The 47th convocation ceremony for the the 9th AICTE approved PGDM batch of 2019 - 2021, of the Institute of Management Development and Research (IMDR), Pune, was held on Saturday, 27th August 2022 at Ferguson College Amphitheatre.

The ceremony begun with a true note by Director, IMDR, Dr. Shikha Jain who in her address mentioned that IMDR is dedicated to deliver the best education possible by providing comprehensive support, including professional development and training, classroom resources and enabling a learning community.

Mr. Sanjay Inamdar, Founder of FLUCON, Co- Founder l, COEP’s, Bhau Institute of Innovation, Entrepreneurship and Leadership was the Chief Guest for the ceremony. He congratulated all the diplomats. He emphasized on the essence of entrepreneurship besides the corporate world. While addressing the audience, he also mentioned that he would have considered himself lucky had he graduated from IMDR.

He sensitized the students about the importance of being a good human being. During his interaction with Dr. APJ Abdul Kalam, he mentioned that Dr. Kalam always believed that, “change your headline, meaning -contributing something to the whole country is of equal importance as is being successful in life. He advised the students to carve their own way to success and put a lot of emphasis on social work and contributing to the country, in a way to give back to the society. He urged students to contribute to something that teaches them social value. He encouraged the students to participate in social causes and promoted social entrepreneurship is the key for uplifting the country.

Everyone present was enlightened by the precious words of advice and appreciation by the chief guest during his address to the audience. He also appreciated the hard work of teachers and support of parents in making the functions successful.

Arena Makani received a silver medal for standing 2nd in the class of 2019 - 21. The Vijay Hathiramani Award for Overall Excellence was shared by 2 student Swati Kalra and Aishwarya Chanchad.

Aishwarya Chanchad was conferred as the gold medalist of the batch 2019 - 21.

The ceremony was chaired by Shri Sharad Kunte, Chairman, Governing Body, Deccan Education Society (DES). In his address, Shri Sharad Kunte said that IMDR is proud of its students who are catalysts of change in corporate organisations. He also said that there is a need to educate the general public, there is a need to increase export and decrease import and if everyone uses local goods then import will decrease. He addressed the students saying that they are the managers and if they tried to encourage research in their organisation then even though people are not scientists but this initiative will be developed if everybody is skilled.

The event ended with the vote of thanks and concluding notes given by LMC Chairman, Shri Mahesh Athawale, appreciating the achievers who not only excelled in academics but also who brought laurels to the institute.

Overall, the celebrations concluded on a happy note encouraging the students to establish further milestones in the journey of success.

3) The Late Brig. N.B.Grant Prize is for standing first in discipline of Ethics- Pradhyum Swamy and Prajwal Suvarna

5) The Jaideep Trophy is for the student who has performed well in academics, sports and extra-curricular activities. -Shameeka Bhand.

6) The Chetan Shah Trophy for the Best outgoing student who has shown organizing talent. - Kartik Kadam.